Red Rock Sound EQ302 is a 32 band graphic equaliser offering 12 dB of cut or boost in 1/3 octave steps between the frequencies of 16 Hz and 20 kHz.

The graphic equaliser is a vital component in any audio system. The entire signal passes through it and so any limitations imposed by the equaliser will compromise the performance of the whole system. For example, an indifferently designed equaliser may introduce severe phase distortion, noise and other anomalies related to centre frequency accuracy, filter shape and attenuation accuracy which may manifest themselves as an overall deterioration in the perceived sound quality of the system. Clearly, this is an unacceptable state of affairs, but fortunately your choice to utilise a Red Rock Sound EQ302 Graphic Equaliser will eliminate these problems, offering you unprecedented product performance coupled with the highest filter calibration and reliability standards in the industry.

It should be noted that graphic equalisation cannot always overcome all frequency response related problems. There are applications where the ability to cut and boost the response at a particular frequency, or over a certain bandwidth other than the equaliser specified one, is required to overcome exceptionally difficult response anomalies or narrow band feedback problems.

When such an instance is encountered, it may be more appropriate to use the greater range of control provided by a parametric type equaliser, where the centre frequency, bandwidth and amplitude are all controllable.

Equalisers may be used for corrective or creative purposes and the Red Rock Sound EQ302 is applicable in both live sound and studio applications.

For studio use, a pair of 1/3 octave equalisers might typically be used to compensate for deficiencies in the control room acoustics and in this instance, the precision allowed by 32 bands is a great advantage. Because it is almost impossible to set up an equaliser accurately without first analysing the room response, the centre frequencies of the filters have been chosen to correspond with those of the Red Rock Sound SA60 Spectrum Analyser. In this way the readings can be transferred directly from the analyser to the equaliser. 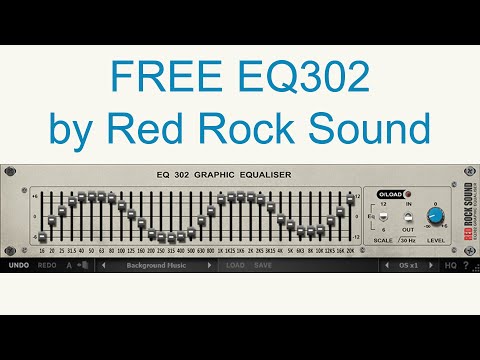